Behind every great wine is a story.

The three associates hived off a single vineyard site comprising three micro blocks located along a limestone seam, recalling the soils of Chablis grands crus. This instils the juice with extraordinary salinity and a tension that can only acquire a sheen after extensive ageing. Boërl & Kroff is single varietal Pinot noir. The fruit undergoes a draconian selection where only impeccable fruit is retained. The incredible Pinot noir heritage, imported from Burgundy in the 12th century by Saint-Bernard of Clervaux, has been preserved over time by the Drappier family. Although the grape variety has long acquired Champagne citizenship, there is no mistaking its Burgundy DNA – its compact, delicate clusters, which can be fickle but undeniably produce stellar wines.
There is no silver bullet for creating Boërl & Kroff. Each vintage is viewed as a unique individual and is only released when it reaches peak maturity. In fact, the 1996 vintage will be released before the 1995. “This is a relentless search fraught with adversity. There is nothing formulaic here”, stresses Stéphane Sésé, the House’s co-founder who took over the reins in 2020 and now runs the venture single-handedly.
Boërl & Kroff is crafted in Champagne but its terroir, the origins of its grape variety and its flavour – which can on occasions be likened to consummate white wines – lend it a Burgundy spirit. Hence, the home of Maison Boërl & Kroff nestles in the heart of Burgundy’s wine lands, not far from the border with Champagne, at Château de Chevigny. Stéphane Sésé was magnetised by the chateau as soon he first set eyes on it, not only because of its charm, but also due to the outstanding heritage he found there – the Italian theatre, the rare frescoes and the noble materials, to name a few. This one-of-a-kind venue for celebrations coupled with the history of its former owner – flamboyant millionaire Louis Brossard who was passionate about art and Champagne – resonates with Boërl & Kroff, it too the product of an extraordinary fusion of craftsmanship.
Boërl & Kroff is a declaration of love to France and the art of living, encapsulated in a multi-dimensional Champagne which the world’s top experts agree is in a league of its own. 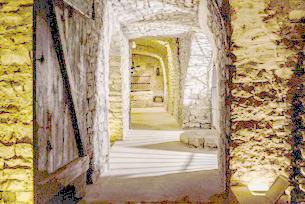